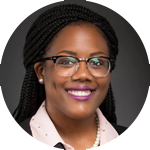 Brittney Williams, 29, is studying for her master’s degree in social work at the University of Michigan. She’s an Alzheimer’s Association Ambassador to Rep. Debbie Dingell (D-Mich.).

In my junior year at the University of Michigan, my mother — who was 49 at the time — was diagnosed with early-onset Alzheimer’s. As time progressed, depression related to her diagnosis took a considerable toll on my academics, and I was suspended. When I returned home to sit a semester out, I ended up taking on full-time caregiving duties for my mom, and I also helped my father run the household and look after four of my five younger siblings. Though I grew considerably from it, caregiving was an incredibly painful experience. Alzheimer’s created a two-fold loss that was very difficult to cope with: First, I lost my mother’s personality, and then I lost her physically, five years after her diagnosis.

What are some of the activities you've taken part in as an advocate?

Among other things, I’ve shared my personal story as part of a mass effort to garner support for the HOPE (Health Outcomes, Planning, and Education) for Alzheimer’s Act and PCHETA (Palliative Care and Hospice Education and Training) Act. I authored an article for the Michigan Chapter of the National Association of Social Work on what role the profession of social work can play in the implementation of the HOPE Act and the support of patients and families dealing with Alzheimer’s disease. I also provided input to the Great Lakes and Greater Michigan chapters of the Alzheimer’s Association, and Sen. Debbie Stabenow’s (D-Mich.) office, on how to improve outreach to communities of color in the state of Michigan.

What are some details about your work as an Ambassador?

I started out a couple of years ago as a member of the Alzheimer’s Congressional Team and took over the Ambassador role this past summer. Much of my previous Alzheimer’s advocacy work is centered on diversity outreach, especially to African-Americans, who are twice as likely to be diagnosed with the disease. Having Ypsilanti, a city with a strong African-American presence, as a part of the district has allowed me to further that effort.

Have you attended the Advocacy Forum? If so, what has the experience been like?

Yes! It’s been very inspiring and fulfilling. There’s such a power in seeing over 1,000 other people who, in some way or another, share your story. Having a loved one with Alzheimer’s, and caring for and/or losing them, can be very isolating, and you can forget that you’re not alone in your experience. The Forum can also be painful, though, and emotionally draining. I remember breaking down crying my first year during a meeting because it was hard telling my story over and over again all day. This past year, I struggled with the emotion that came with realizing that the Forum has been going on for almost as long as I’ve been alive, but we still don’t have a treatment or cure … But I had so much support from other advocates who had similar feelings of frustration, anger and emotional drain. So even in the difficult moments, the Forum is amazing.

Go. If your uncertainty is about the money, there are scholarships available. If it’s about taking time off, I promise you that it’ll be worth it. If it’s about a fear of the emotional toll of opening up about your experiences, there will be more than 1,000 people who can affirm and comfort you. Forum is an incredible experience, one that you don’t want to miss out on because of uncertainty. Take the plunge!

How do you feel your advocacy efforts have helped the cause?

I think my advocacy efforts around diversity outreach have been particularly helpful. Acknowledging disproportionate diagnoses in communities of color without taking sufficient action is unacceptable. I provide insight as an actual member of the community, on how to better approach outreach, and I feel I’ve made a difference. My transparency in my advocacy has also helped other people to get involved as advocates and share their own stories. The more voices we have, the further the cause is advanced.

In what ways can younger people get involved in the fight against Alzheimer's, and how can we engage them?

One great way for younger people to get involved is to form student organizations at varying levels of education, which open up dialogue about Alzheimer’s disease, and fundraise for the cause. The dialogue piece in particular is important; a lot of younger folks are not as engaged with Alzheimer’s advocacy because their peers simply don’t talk about the disease.

As far as engagement, the Association can create high school and college-level groups (similar to the young professionals groups that already exist) that are either stand-alone groups or collaborate with what people have already created at their schools. Social media is also a great way to engage younger folks, by creating content which speaks directly to their needs, in a style which speaks to their generation.

What more do you think needs to be done to fight the disease? What role will our advocates play?

I think more research, and better funding for said research, are the key components for fighting Alzheimer’s disease. Much of that will come from continuing to petition our representatives for their support, and also from making clear that continuing to treat Alzheimer’s as low priority — especially with the baby boomer generation aging — is unacceptable. Advocates will also further the fight by recruiting more voices, who will in turn apply more pressure for change. At times it’s hard to be optimistic, but as we continue to work together, the tides will turn. I’m looking forward to that day.